The above is a quote by Frank Herbert. He wot wrote Dune. I suspect he knows what he speaks of.

The reason I used the quote? Judged, the final book in the trilogy is done. It’s been sent off to typesetters just this week past and well, it’s really kind of terrifying, you know?

I’ve written a trilogy in two years. It almost broke me, but I did it.  And I loved it most of the time. The time I didn’t I was probably falling asleep typing…this happened during Vowed a lot.

And I must apologise for the long delay between blogposts. It is really bad form and not like me at all.  I promise to do far far better in the future.

Here’s what’s happened over the past few months:

31st of March was my last day at my job in the West End. I spent April 2015 editing Judged and being at home.  It was a tremendous change of pace. I got to know my local area really well as I took Sparrow for a lot of very long walks and actually managed to get a tan.  And by tan, I mean I am slightly less milky white than before.  Sparrow is sleeker than before.  I discovered that I’m not cut out to be at home but it was silly trying to look for a job when I know I couldn’t start till June / July anyway because…

In May 2015 Mark and I travelled to South Africa where I was part of the Franschoek Literary Festival.

Here are some photos:

We had an amazing time. I fell in love with Cape Town all over again.  I fell in love with Franschoek again.  The area is majestically beautiful and treated us wonderfully well.  I miss it so much but then I missed London a lot too whilst we were gone.  I loved visiting the local schools and giving talks. I am desperate to go back and do some more talks.  The children were so enthusiastic and so much fun to hang around with afterwards.  We argued about movies and books and heroes and villains.  I felt right at home!

The week after the Franschoek Literary Festival we travelled to Johannesburg where I got to hang out with my family.  I got to know new great-nieces and great-nephews and catch up with family I’ve not seen in five years.  It was a lot of fun.  We also got to visit some touristy places in and around Johannesburg, including the Lion Park. We made friends with some lion cubs under the careful supervision of their handlers and a gorgeous cheetah found Mark to be very comfortable and snuggled with him for a while.  His handler was slightly alarmed by that.  Mark naturally assumed he was the next Tarzan, Lord of the Jungle.

I was a guest at Kingsmead Literary Festival too and it was as much fun as the Franschoek Literary Festival.  I got to meet and be on a panel with Fred Strydom and Edith Bulbring, both authors I’ve fallen in love with. Do look them up, people of earth – you won’t be sorry.

Once we got back to London my copy edits had turned up so I tackled that with enthusiasm. I got that back to Macmillan in a timely fashion.  Then I set about and tidied up my CV and went to meet with recruitment agencies and did a handful of interviews. I started my new full time job on the 15th of July and it’s in the City, rather than the West End, so to me that’s a big change!  And I’m enjoying it so much.  It’s a fun diverse role with some genuinely great people to work with and I like that I’m being pushed and made to think and am allowed to be a little creative.

This coming weekend is Nine Worlds! 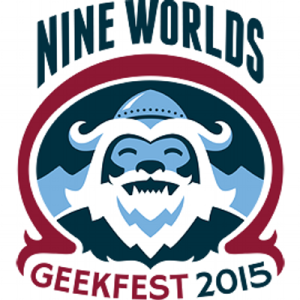 I am doing a few panels and I’m running a writing workshop too. I’m only slightly terrified.  These are the panels I’ll be on.  Please do come and listen to us talk and sign up for my workshop. It’s free! And you can watch me panic and forget the name of my characters.   Yes, that’s been known to happen.

But before Nine Worlds, there’s Fantasy in the Court, hosted by David Headley, owner of Goldsboro Books in Cecil Court and Mark’s super cool agent. I’ll be in attendance, along with a swathe of swashbuckling fantasy authors from a variety of publishers.  Last year’s event was tremendous fun and I think there must easily have been around 150 people or so in attendance.  Writers, readers, fans, editors, agents…all the good folk, in other words.  So, definitely check out the link, buy a ticket and come along.  There’ll be books and people and wine and soft drinks and a lot of fun.  I’ll be the one carrying around a bottle of Evian water, like usual.

What am I doing now that Judged is done and in essence I’ve said goodbye to my characters and the Blackhart world?

I’m taking a tiny break. It’s been crazy writing the trilogy this fast.  So I’m playing a little bit of Playstation/Xbox and watching movies and tv shows and reading. I’m reading so much. I missed reading. I can’t read fiction when I’m writing so I tend to either not read at all or I read fact-stuff or old mythologies or WWII treaties…stuff that I can turn to without having to think/concentrate on.

What I’ll do is write a synopsis for each (I’ve done that with almost all of them) and the opening three chapters of each, and send it on to my agent, Juliet to look at then we decide which to go for. And who knows what’ll happen after that!

And I think that’s essentially me, caught up.  I promise to be far more prolific on here in the next few months.  I’m redesigning the site too with the help of a designer so that it will look more like a website rather than a blog – that’ll happen in the next few months and I’m quite excited about that.

In the meantime, be sure to chat to me via twitter @LizUK.

Oh! And, in case: Banished is on sale for ridiculously cheap over at both Amazon and iBooks – both sites have the e-book selling for less than £1.  Do check it out if you haven’t.