Once upon a time Liz run a review blog.  The review blog was updated at least three times a week.  Now Liz writes and works full time in a dayjob in the West End and forgets about her personal blog.  Liz is basically rubbish.

Chaps, so much has happened over the past few months and yet very little at the same time.  I am hugely apologetic for the delay in updating the blog!

However, Vowed was launched at Forbidden Planet in November and it was fabulous.  Loads of friends came out to hang out with me and there was cake and cookies and it was really a massive sugar high, basically.

Straight after Vowed’s launch in the first week in November I headed into rewrite territory for Judged.  I spent a day with my agent and we talked over the edits, tightening the story-line and refocussing the plot to be more cohesive.  Sometimes you need a kind of reboot and to relook at what you’ve produced and this is why it’s so important to have people around you to guide you.

In the end, there’s this little puzzle piece inside of you that will go ‘click’ because the advice you’ve been given or the thought process you’ve been on somehow suddenly just makes sense. So that little puzzle piece fell into place and it was excellent and I ended up rewriting the entire book, leaving around 30% of original content in and everything else was new.

Deadlines were tight and I basically disappeared off the face of the earth doing anything social. People, I didn’t even go and see the new Mockingjay movie because I was that busy.  Like? How is that even possible!?  Anyway, I will have to be patient and wait for it to come out on DVD, basically.

The rewritten book has been sent off to my editor, Bella the second week of January, so we see what she makes of it.  In the meantime I’m cramming tv shows, movies and reading into my brain and also toying with a variety of new story ideas.

And it is hard because there’s so much I want to do but I have to try and be focused and narrow it down to maybe three top things to send off to my agent. And being enthusiastic about three things to write is crazy because, here’s the thing:

You have to not just be enthusiastic about the thing, you have got to love it utterly because if that book gets picked up by a publisher and it gets published it means you have to literally live with that book that you will be writing, once it’s published, for your entire life.  You cannot get tired of it, ever. It’s like career musicians who write say 5 top 20 songs and whenever they tour, people only care about those 5 songs and not the new stuff and they are expected to perform them all the time. So, here’s a bit of random advice: love the stuff you do because chances are you’ll be doing it for a very very long time.

It is an important bit of advice I remember reading from my pre-agented days when I trolled the internet for websites where writers write the truth about All The Things.  It sort of stuck with me and as I’ve been working on books 2 and 3 of the Blackhart Legacy I realised how true this is. 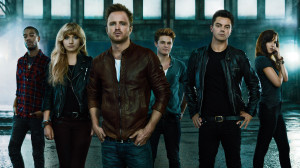 Need for Speed – no, seriously.  It is so good and so much fun also the music is sick. All I can say is: busbusbus!

Kingsman – uch, so good and so spot on.  Superb fight sequences and Colin Firth is absolutely aces as the gentleman spy who can kick ass and be a great mentor at the same time.  Newcomer Taron Egerton is stunningly cute and attractive and really rises to the occasion without being an annoying idiot.  Also: Mark Strong as ‘Merlin’ is a gift.  The movie is horrendously violent but seriously spot on and tongue in cheek. 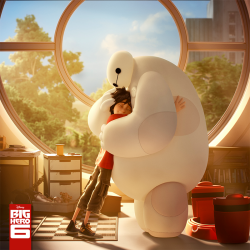 Big Hero 6 – people: this movie is so important.  Main character who is a person of colour in a cast full of girls and boys who are nerds who do science stuff (and oh, cultural representation, hello!). There is so much to love here, seriously.  If you think Frozen is good, you need to watch BH6 because this is about family, about doing the right thing, about family of choice and making tough decisions and it’s also just visually stunning and I want to adopt them all and keep them with me forever.  Please, please go and watch this movie and make it the break-out movie of 2015. This deserves to be bigger than it already is.

Purge: Anarchy:  This movie was just…off the charts good.  Frank Grillo takes an excellent role here and yes, the violence is graphic and awful but the concept behind this broken world is genuinely terrifying.  It reminds me so much of Alexander Gordon Smith’s Furnace books, seriously.  Give them a read – edge of your seat stuff in a world gone badly wrong. 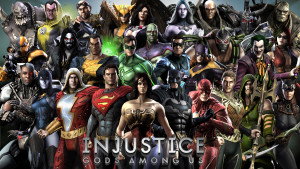 Also, I’ve been playing some games on Playstation – I suck so badly but I do enjoy it so much.  Basically I’ve been playing LEGO: Superheroes / Call of Duty: Modern Warfare (so much suckage) / Assassin’s Creed: Unity (I die so much) but also inJustice and the absolutely stunning The Unfinished Swan.

Scandal – I am only partway through Season 2 and I can’t quite believe it took me this long to actually start watching this show.  Basically I’ve come to realise Shonda Rhimes is one of the best showrunners currently working in the business in the US and I adore her to bits.  Her shows are groundbreaking, not just because they tackle strong fierce subjects, but because the characters live and breathe and feel real but especially the fact that the shows are these vehicles for strong storytelling in which women have genuine agency.  I love it. 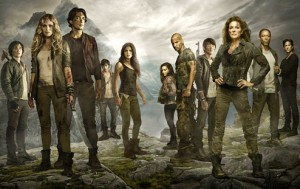 The 100 – Season 2 has started here in the UK and really, if you thought this was a silly TV show aimed at kids who want pretty people to look at in a faux-post-apocalyptic world, I really feel sad for you.  No one in The 100 is safe.  The writers go very dark places and hardly ever do they do it gratuitously.  The characters are strong and vivid and the relationships and political alliances shift and move like you cannot actually believe.  The showrunners and writers here do an incredible job and really, we should commend shows like this wholeheartedly.

Vikings – we’re re-watching Season 2 in anticipation of Seaon 3 showing soon.  Vikings is bloody.  It is dark.  It is beautiful and thoughtful and again it’s strength lies in the how well the characters are written. I find myself watching the show and randomly going onto twitter and just typing out things like: Lagerta! or: Floki, NO! 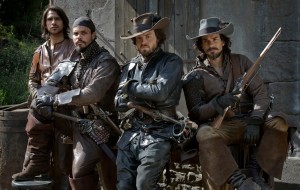 Musketeers: no, seriously, this little BBC show is going from strength to strength.  The writing feels smoother, the costumes are aces, the boys look impossibly hot and the stunts and fights are better and feels more cohesive too.  The girls…the girls need work though. I want more agency for them, not just pretty little dolls in pretty outfits and Constance is the one who gets some great lines but I need them to be more, I won’t lie.  But, knowing that Jessica Pope looks after this series, I’m pretty damn sure we’re going to see some great development for the female characters.  The fandom behind the Musketeers is a growing fandom too.  All you have to do is check your twitter timeline when the show is on to prove that. And here’s the thing: Musketeers is basically the ONLY TV show I watch live if I can manage it.  Now that says something.

I’m going to try and compile a list of books I’ve been reading / remember to update my goodreads thingy but basically, I’ve been reading a helluva lot too.  Not just fiction stuff but also loads of non-fic for research etc.  so I’ll start making a list, maybe?

Lastly, find me on: