I am so sorry that I’ve not been to blog – last time was over two months ago in APRIL.  Holy smokes, where does the time go?

What have I been up to?

Well: there was another edit of Vowed with my editor Bella, then we did a copy edit with the copy editor (copy editors are the best, true story) and in the meantime I got stuck into book 3 and am writing all the words (sitting on around 30k words).  Page proofs are coming up for Vowed in the next week or so, so writing will take a back-burner for about two weeks.

Then straight back into writing book three which is exciting and sad because I’ve put these characters through the ringer and really, all I want to do is hug them and pet them and make shushing noises and tell them everything’s going to be okay.  But you know, I can’t, because book 3 is <REDACTED> but there’s also <REDACTED> because of what happens in Vowed and I’m so sorry, I hope you’ll forgive me.  I’ve had a beta-reader (Jenni!) read the first 26k of book 3 and apparently it has feels and she’s worried about everyone, so that’s great, because it’s the right reaction.

Stuff I’ve been watching / going to see before falling into writing all the words:

I’ve fallen, or rather re-fallen in love with Steve and with Bucky and Natasha and Sam so hard.  I’ve subsequently gone, in true fan-girl fashion and spent money on Funko Pop figures and the art of the movie book.  Because really, who needs money for food and rent, right?  Also, I possibly may have seen the movie more than once. *coff* I also have the comics and have been re-reading them and well, Ed Brubaker <3 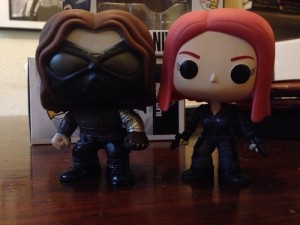 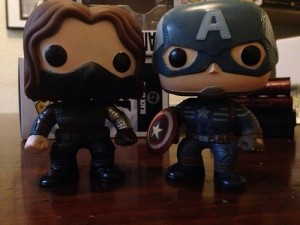 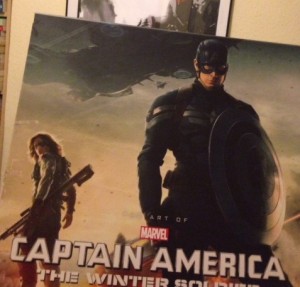 This show. I can’t even begin to cover how much I love this show. It’s dark, it’s packed full of meta and I love it utterly.  Basically: Brian Fuller is an evil genius and I want his brain.  Yes, there are levels of violence / gore that will put some people off but it’s the characterisation of Will Graham, Hannibal and Jack Crawford that’s so important here.

The sets are designed with minute detail as is everything about the show.  For instance, something I noticed is how Hannibal’s suits hanged throughout Season 1 and Season 2.  They are sartorial elegance, always, but the designer has been so clever choosing the colours he wears so that it enhances each scene – he (both designer and Hannibal as character)  literally uses his suits to foreshadow his actions, going from lighter themes to darker.  Maybe this is just me seeing stuff where there isn’t anything, but in my headcanon, this makes complete sense.

I am in an abusive relationship with GoT.  Last week bad things happened to Oberyn Martel (I know, I’ve read the book, I was supposed to be prepared, I wasn’t) and I sobbed.  This is a sign of creators doing it properly: taking a secondary character and lifting them from the background and making them real and having readers and viewers identify and feel for them.  I hate them for doing that to me.   Last night’s episode bad things happened. I hate them for doing that to me. But I was ready.  I still cried.  Thank the heavens the season finishes next week. 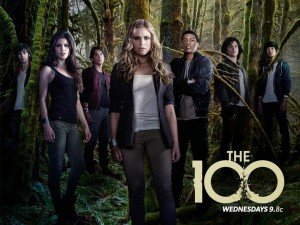 This show is eventually coming to the UK after it doing great things Stateside. I’m very excited about it.  The core concept is:

Set 97 years after a nuclear war has destroyed civilization, when a spaceship housing humanity’s lone survivors sends 100 juvenile delinquents back to Earth in hopes of possibly re-populating the planet.

The above is taken from IMDB – trailer below

What makes The 100 such an interesting show is (bypass the ridiculously attractive cast) the fact that we get to see what happens to the one hundred who made it down to earth…but we also learn about those left behind on the spaceship.  And none of it is passive watching either – people have emotions and thoughts and they all do what they think is best, for various convoluted reasons.  Again, it shows that the writers are doing it right.  There are characters you hate, characters you love and characters who are so bad it breaks your heart because you want them to redeem themselves but then stuff happens and there’s explosions and kissing and death, so much death, and threat and well.  I can’t wait to own this series on DVD.  Again: really pleased we’re getting it in the UK and unlike Star-Crossed (politically heavy show about aliens on earth) it got a renew for Season 2.  So hurrah to Akela Cooper and her team of writers.  You guys are ace. 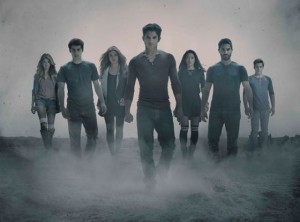 Yes, I’m still fangirling about Teenwolf.  Season four starts in less than two weeks. I am not ready.  I am totally ready.  Sadly for the UK we never got to see Season 3 on our tv screens BUT iTunes bought it so you can rent / buy it through them which is something at least.  I think it’s a shame that it’s not being shown in the UK as it has a massive following with supremely dedicated fans.  The characters are great, the storylines are great and the fact that they delve into little known myths and lore, and not just Western myths and lore, makes such a superb change from the usual fare.  The cast has ridiculously pretty people but it also has a solid team of strong female characters who are so great and who hold their own when it comes to the intelligence and kick-ass stakes.  I’m totally Team Lydia who, if fandom is correct, will one day take over the world and rule it as our benevolent queen. I can get down with that.

So Teenwolf and The 100 are two great shows that get a lot of flack from haters – in the end, I do think viewers should give them a chance and try to go into watching these shows without prejudice – suspend your disbelief and have fun.  That’s what you’re supposed to do when you want to be entertained.  There’s a reason the studios are making these shows and I’m very grateful to them and all involved because they are fun and entertaining!

Anna and the French Kiss

Lola and the Boy Next Door

So much love for these two books.  My fear, always, when I start a contemp romance is that the heroine will be someone I can’t relate to.  In both Lola and Anna the books are very much about them and it’s character driven stories where the romance feels natural and part of the bigger scheme of things.  So much love.  *kisses the books because they are lovely* 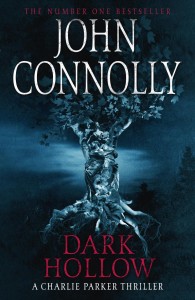 I’ve also been reading John Connolly. More people need to read John Connolly, okay? Listen! No, seriously, listen: John Connolly writes crime, okay…but crime that makes you feel like you should check your back often, not necessarily because someone’s there to stab you or shoot you (that happens too) but because there’s bits of his books that veer into the HELLISHLY creepy and supernatural and it gives me shivers.  He has a turn of phrase that sometimes just punches you in the gut and leaves you reeling.  I remember reading Every Dead Thing and freaking out because it managed to get under my skin so much, but especially when Charlie Parker (our main character) experiences this really peculiar incident whilst on a plane (the least supernaturally freaky place ever) and it left my mind going: wut? In Dark Hollow, page 55 of the pb, just…it’s far better than Stephen King at his creepiest, trust me.  And then there’s this one scene in Dark Hollow on the train and I actually had to put the book down for a few seconds because I went through both blind panic but also feels.  Man, that’s hard to do.  Just really, pick up John Connolly’s books.  You won’t be sorry.  Also: he’s a really nice guy.  The bastard.

I think that’s it for now.  Obviously I can spend more time wittering on about going to the movies and seeing more stuff and reading more books, but really, this is the core of it.  Oh, and one more thing: DO go to the Natural History Museum for their fantastic Mammoths: Ice Age Giants exhibition because it is fantastic.  I’ll leave you with this snarly picture from their website because it’s aces.  And snarly. 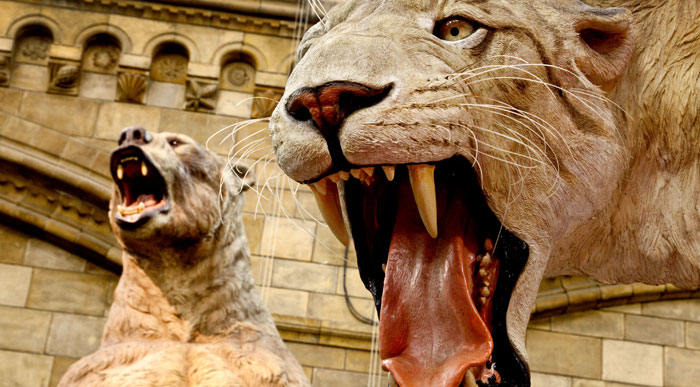 2 thoughts on “Long time no blog!”