It’s my first day back in the office for about two weeks and it’s jarring.  However! The sun has come out and the skies are that brilliant blue that make a lie out of the storm we had a mere half an hour ago.

As of today, Banished is 52 days away from being published.  Needless to say the levels of fear and excitement are pretty much on par.  Here’s a pie chart to indicate what things are like for me right now: 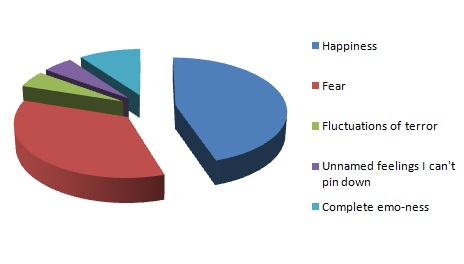 Yes, I’m procrastinating about actually doing anything work-related as my brain has kinda melted by having to get up this early as per normal.  Also, I’ve not been sleeping well these past few weeks.  And it’s mostly because of guilt.

I don’t understand it either.  I made my deadline and sent the book in to my editor for editing and yet..YET, I wandered around the house during my brief break and felt this weird loss inside me.

I picked up books to read and put them down.  I watched a few movies, I slept loads, I got trapped in the house as our front door swelled shut (not as exciting as it sounds) and I couldn’t get out until our postie kicked it in for me…and I went walking in the local park  pondering All The Things and yet I felt lost and weirdly empty.

It was because I didn’t have anything to write, I realised.  I made myself sit down at my laptop the one evening Mark was upstairs on the PS3 and I wrote a random scene.  Which lead to more random scenes.  And slowly a story unfolded and so I jotted some thoughts down about who the characters are, what they looked like, what they did / didn’t do, stuff like that.  What surprised me endlessly is that it was a contemporary YA with romantic elements but a bit crimey/thrillery at it’s heart.  It was something I’d never tried writing in the past and it felt like quite a rush.  It’s a feeling that’s addictive.

This story made me think of something else I wanted to write for ages.  So I made more notes and opened another document and wrote some random scenes, test-driving the characters and points of view.  I went searching on Pinterest and found pictures that covered both these stories and pinned them with glee.

And all the time I was playing with these two stories, other ideas kept coming and so I gave in and made notes on them too, along with twisty turney bits for Book 3 which I can only tackle once I’ve had feedback from my editor because of stuff happening in Book 2 that need resolving.  *scared yet mysterious face*

Bizarrely, I no longer feel lost.  Or empty – because I’d done something to do with my writing. I’d created words that quite possibly may not go anywhere at all, except sit higgledypiggledy in that Ideas Notebook 2014/1.  The point is I wrote something, anything, and I challenged myself by tackling something a bit different.

The way I felt, walking away from the notes, drove home the point that it’s not something I can’t not do.  I suddenly felt comfortable in my skin, like I could breathe and not just shallow city-breaths either but long full seaside breaths.  Also, that weird bits of dialogue that kept cropping up in my head now had somewhere to go.

I’m not really sure what the point of this blogpost really is, apart from saying: if you’re a writer, write.  Just keep doing it.  For your own sanity and those around you.