Since we shut MFB at the end of 2012, both Mark and I have been reading practically nonstop.  Mark’s been devouring contemporary action thrillers and some light urban fantasy and near-future science fictiony type stuff.

I’ve been reading crime thrillers, urban fantasy, non fiction books about crime and research books on folklore and also swathes of books for teens and younger readers.  Also: graphic novels, lots of them.

A lot of the books we’re reading comes from our existing collection of books but some of it comes from our local library.  I know the books I have on my shelf but walking in to the library is a breathless event because you just never know what you may find.

I’ve also been able to attend two great launches in the past few weeks.

My good friend, Mo O’Hara (Maureen Oakeley before she got famous), had the launch of her My Big Fat Zombie Goldfish at the pretty Tales on Moon Lane a few weeks ago.

Here are some photos from the evening.

It was such a lovely evening – loads of SCBWI folk attended, but also a lot of Mo’s friends which was great.  Super fun to see adults trying to comprehend the madness of a children’s author’s book launch.  There was much green zombie juice to drink too, which definitely helped the very loud and super excited atmosphere.

Friday past was Sarwat Chadda’s book launch for his second Ash Mistry title:

The book is called ASH MISTRY AND THE CITY OF DEATH.  I mean, how could you not want to read it? Here’s the stupendous cover:

Sarwat’s enthusiasm for his books, characters and writing is infectious.  He’s one of those guys who really thinks about what he’s doing but he kinda hides it behind a facade of silliness.  I’ve got you sussed, Sarwat! You can’t lie.  CITY OF DEATH sounds incredible and according to Sarwat, it’s very much a homage to Mowgli in The Jungle Book.  I can’t wait to read it.  (I’m lying, btw – I’ve not yet read book one – SAVAGE FORTRESS – because I’m waiting for the third book to be out so I can read them all in one go!!)

Here are some books I bought recently and some that I’ve been reading: 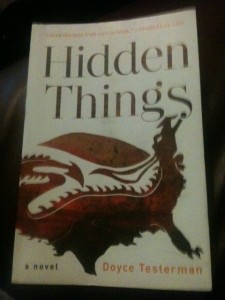 I forget where I read a review of Hidden Things.  I loved the cover and the write-up sounded great, so I bought it ages ago.  Once I got stuck in I just could not stop reading.  Definitely a slow burner and none of the supernatural elements you find in Hidden Things is leery or too in your face.  Mr. Testerman is super restrained as he walks Calli through this world and I fell for his writing in a big way.  Also: you’d want a girl like Calli on your side when the world goes pearshaped. 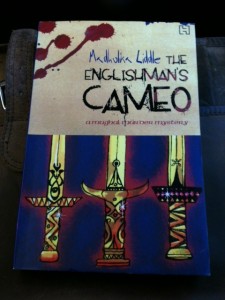 I saw a review of Madhulika Liddle’s most recent book in one of the newspapers here at work.  I loved the sound of the writing and the world and the era it’s set in and decided to give the first book “The Englishman’s Cameo” a whirl.  Well, I loved it – the world, 17th Century India, is rich in detail, to the extent where, even in the middle of winter here in the UK it felt as if I was there, in this warm arid place.  The locations are evocatively described and a lot of terms used aren’t translated into English but that doesn’t matter as it’s used in context so you understand what the author refers to.  The main character is imminently likeable and  I had to fend a colleague off as he wanted to nab the book from me.  I made him buy his own copy.  The bloody cheek. 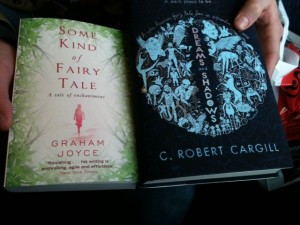 On Saturday Mark and I came in to town to have a celebratory lunch with Sarah and her hubby and it was wonderful.  I ate until I wobbled around like those bobble-head dolls.  We bid them adieu late afternoon and en route to the station we swung by Forbidden Planet where I got treated to two lovely titles.  I’ve started Some Kind of Fairy Tale by Graham Joyce and already and bah, it’s ridiculously good.  Damn you, Graham Joyce! *waves fist impotently at the skies*

And Sunday was Game of Thrones Season 2 marathon.  From my Facebook and Twitter feeds, it seems a lot of friends opted to do this as mostly the weather was vile and grim.  And what better way to while away your time than to wander around Westeros and hate Joffrey and love Tyrion and crush on Jon Snow?