This Saturday past was icy cold.  There were snowflurries and a bonechilling wind blowing in from the North.  This was of course signal for Liz and Mark to head out into London and have an ABA.

Bundled up, we headed to Borough Market, recently refurbished and redone and packed to the rafters full of good food, wine, fruit, beers, cider, cakes, meats and all manner of deliciously delicious things.

I love walking around Borough Market, and in fact, all markets in and around London.  There’s something old-timey about them. A twinkle of mystery in a seller’s eye that makes you feel they have an extra bit of something behind the counter, something from beyond the Wall, like in Gaiman’s Stardust.

Here follows a plethora of photos.  A lot of food – as usual, some colourful umbrellas and a bit of graffiti, as is my wont. 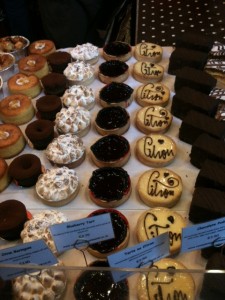 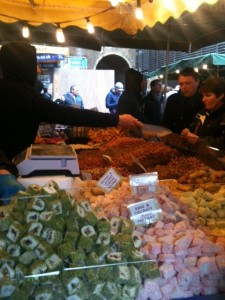 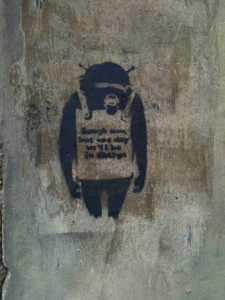 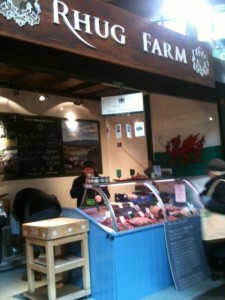 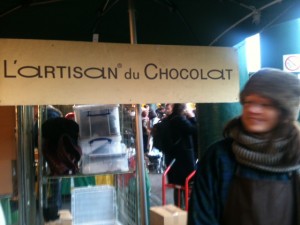 After all of this, and having a nice mug of hot cider, Mark and I headed into Soho and stopped by the Hummus Bros guys and had some hummus and fresh bread, before visiting Foyles and chatting to the amazing booksellers there about upcoming books.  Jeni, Jo and the team are always ridiculously good at stuffing me full of good reading material but this time round I was good and walked away without a purchase, mostly as I know I will be back in about 2 weeks’ time for a blow-out but also, in a few days’ time I will be buying Mo’s superb debut book published by the great peeps at Macmillan’s Children’s Books.  So I need to contain myself.

We also swung by Forbidden Planet.  A great selection of newbook  titles were out.  I spotted a few by Strange Chemistry and Angry Robot books that looked like it could chew holes in my budget.  I headed around to look at some comics and graphic novels and uhmed and ahhed once more over the Hellboy library editions when I spotted Mark chatting to someone.  Turns out it was Laurence Campbell who really, along with Mike Carey and Tony Lee, has to be one of the nicest guys in comics. 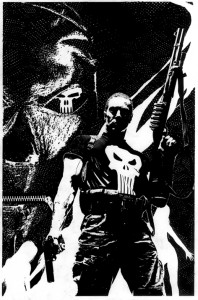 I fan-girled at Mr. Campbell in an embarrassing way, which he took with good grace.  Want to know why I fan-girled at him? He’s only doing a run with Mike Mignola on the current BPRD series – to me, that’s just utterly the best thing that could have happened to Mr. C.  He is one of my and Mark’s favourite artists and his work on The Punisher has been excellent.

Anyway.  We headed home after that, having bought some comics and ended our day having some glorious sushi at a local restaurant in Catford with a friend and her niece.  It was our friend, Lex’s birthday, and the sushi was her idea.  And you know? It was the perfect end to a great day.

One thought on “Magical Markets in London”