After spending an obscene amount on books over Christmas, both real life books and e-book format, I’ve kinda decided to try and not buy excessive books as the impulse grabs me this year.  It’s going to be BAD and possibly lead to withdrawal symptoms, crying and the occasional tantrum. For this I apologise profusely.

I had an amazing year of reading last year.  And 2013 seems to be a great year for reading too – so many fantastic sounding titles are coming out to devour.

There are two that I am super keen about – and not just because they’ve been written by friends of mine either. When Tom’s big brother dunks Frankie the goldfish into radioactive gunge, Tom zaps the fish with a battery to bring him back to life! But there’s something weird about the new Frankie – he’s now a Big Fat Zombie Goldfish with hypnotic powers . . . and he’s out for revenge.

I know Mo through SCBWI and we are in the same crit group.  We read MBFZG at inception and in instalments and it is genuinely laugh out funny and comedic.  Mo is a great visual writer and I think she’s going to do pretty damn good with this as it ticks all the boxes for younger fiction.  Or rather, fiction for people who aren’t scared to belly-laugh.

Mo’s book is out in March from Macmillan Kids so be sure to pre-order it.  Also: zombie goldfish FTW! 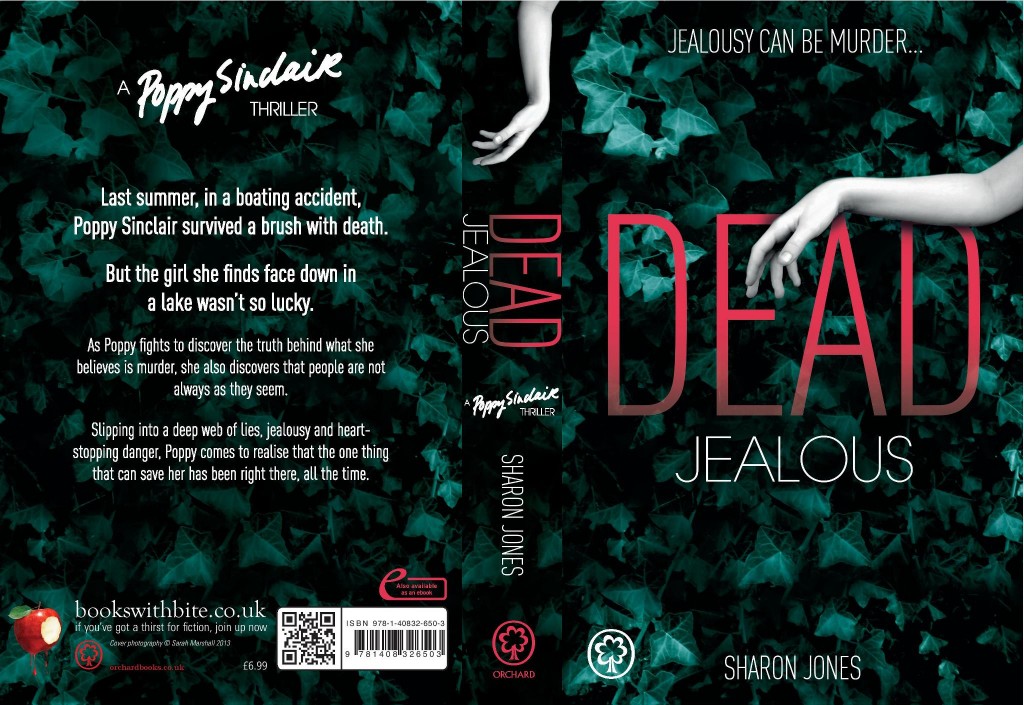 People think of Mother Nature as a gentle lady. They forget that she’s also Death…

Sixteen-year-old Poppy St John believes in quantum particles, not tarot cards, in Dawkins, not druids. Last summer, in a boating accident in the Lake District, Poppy had a brush with death. But the girl she finds face down in Scariswater hasn’t been so lucky. As she fights to discover the truth behind what she believes is murder, Poppy is forced to concede that people and things are not always what they seem and, slipping ever deeper into a web of lies, jealousy and heart-stopping danger, she comes to realise – too late – that the one thing that can save her has been right there, all the time.

I’ve known Sharon for a few years know – we first met online via Twitter, then in real life and between Sharon, Sarah and I, we struck up this cool friendship of badgering one another into writing and finishing books and stressing about agents and in Sharon’s case, getting a bookdeal and all that entails.

Dead Jealous is already pre-ordered (as is Mo’s book) so they don’t really count towards my *no buying books* quota for this year.  I’ve read a few chapters of DJ but I know Sharon and her agent revised it extensively to make it even betterer, which is great news for us! But just – and I’m about to show my fickleness – look at that cover! Isn’t it glorious? I’ve been chatting to Sharon too about the next Poppy book and I it sounds so good.  Dead Jealous is out from Orchard in July. *waits*

I love my writerly pals.

Other books on my wish list, in no particular order:

The Demonologist by Andrew Pyper

Professor David Ullman is among the world’s leading authorities on Christian religion and myth. Not that he’s a believer. He sees what he teaches as nothing more than entrenched fiction – the “things that go bump in the mind”. It’s why when he’s offered a trip to Venice to be a consultant on a case study based on his expertise as a “demonologist” he accepts, seeing it as a free vacation for his teenage daughter and himself.

But what he witnesses in an attic room at an address amidst the decadent splendour of the old city will change what he believes forever. Terrified, David races back to his hotel. But now he has the unshakable feeling that he is no longer alone. And that the voice that passes from his daughter’s lips before she jumps from the hotel’s roof belongs to a being he has long studied, but until now never thought could ever be real…

How cool does that sound? I like a bit of horror!

The Best of All Possible Worlds by Karen Lord

The Sadiri were once the galaxy’s ruling élite, but now their home planet has been rendered unlivable and most of the population destroyed. The few groups living on other worlds are desperately short of Sadiri women, and their extinction is all but certain. Civil servant Grace Delarua is assigned to work with Councillor Dllenahkh, a Sadiri, on his mission to visit distant communities, looking for possible mates. Delarua is impulsive, garrulous and fully immersed in the single life; Dllenahkh is controlled, taciturn and responsible for keeping his community together. They both have a lot to learn.

I have a copy of Redemption in Indigo which I will be reading very soon.  I love Karen Lord’s gustiness when it comes to interviews so I’m looking forward to trying her books.

Above World by Jenn Reese

Thirteen-year-old Aluna has lived her entire life under the ocean with the Coral Kampii in the City of Shifting Tides. But after centuries spent hidden from the Above World, her colony’s survival is in doubt. The Kampii’s breathing necklaces are failing, but the elders are unwilling to venture above water to seek answers. Only headstrong Aluna and her friend Hoku are stubborn and bold enough to face the terrors of land to search for a way to save their people. But can Aluna’s fierce determination and fighting skills, and Hoku’s tech-savvy, keep them safe? Set in a world where overcrowding has led humans to adapt – growing tails to live under the ocean or wings to live on mountains – here is a ride through a future where greed and cruelty have gone unchecked, but the loyalty of friends remains true.

I first stumbled across Jenn Reese in a conversation with some people on twitter.  They reccomended her book: Jade Tiger to me and I bought it in from the States and it is SO good.  Martial arts kung fu questing with great folklore.  All the stuff I like.  So this new book by her, a fantastical sounding MG novel, has me excited.

The Palace of Curiosities by Rosie Garland

A luminous and bewitching debut novel that is perfect for fans of Angela Carter. Set in Victorian London, it follows the fortunes of Eve, the Lion-Faced Girl and Abel, the Flayed Man. A magical realism delight.

Before Eve is born, her mother goes to the circus. She buys a penny twist of coloured sugar and settles down to watch the heart-stopping main attraction: a lion, billed as a monster from the savage heart of Africa, forged in the heat of a merciless sun. Mama swears she hears the lion sigh, just before it leaps…and when Eve is born, the story goes, she didn’t cry – she meowed and licked her paws.

When Abel is pulled from the stinking Thames, the mudlarks are sure he is long dead. As they search his pockets to divvy up the treasure, his eyes crack open and he coughs up a stream of black water. But how has he survived a week in that thick stew of human waste?

Cast out by Victorian society, Eve and Abel find succour from an unlikely source. They soar to fame as The Lion Faced Girl and The Flayed Man, star performers in Professor Josiah Arroner’s Palace of Curiosities. And there begins a journey that will entwine their fates forever.

I love circus stories.  There’s something about them that is magical and creepy and this story and the way it’s been described just sounds fantastical.

In the debut novel DREAMS AND SHADOWS, screenwriter and noted film critic C. Robert Cargill takes us beyond the veil, through the lives of Ewan and Colby, young men whose spirits have been enmeshed with the otherworld from a young age.

This brilliantly crafted narrative – part Neil Gaiman, part Guillermo Del Torro, part William Burroughs – follows the boys from their star-crossed adolescences to their haunted adulthoods. Cargill’s tour-de-force takes us inside the Limestone Kingdom, a parallel universe where whisky-swilling genies and foul-mouthed wizards argue over the state of the metaphysical realm. Having left the spirit world and returned to the human world, Ewan and Colby discover that the creatures from this previous life have not forgotten them, and that fate can never be sidestepped.

With sensitivity and hopeful examination, Cargill illuminates a supernatural culture that all too eerily resembles our own. Set in a richly imagined and constructed world, complete with its own richly detailed history and mythology, DREAMS AND SHADOWS is a deeply engaging story about two extraordinary boys becoming men.

What more can I say apart from: I want to read this now!?

The Ocean At The End of The Lane by Neil Gaiman

THE OCEAN AT THE END OF THE LANE IS A NOVEL ABOUT MEMORY AND MAGIC AND SURVIVAL, ABOUT THE POWER OF STORIES AND THE DARKNESS INSIDE EACH OF US, CREATED BY THE UNPARALLELED IMAGINATIVE POWER OF NEIL GAIMAN.

THE OCEAN AT THE END OF THE LANE is a fable that reshapes modern fantasy: moving, terrifying and elegiac – as pure as a dream, as delicate as a butterfly’s wing, as dangerous as a knife in the dark, from storytelling genius Neil Gaiman.

It began for our narrator forty years ago when the family lodger stole their car and committed suicide in it, stirring up ancient powers best left undisturbed. Dark creatures from beyond the world are on the loose, and it will take everything our narrator has just to stay alive: there is primal horror here, and menace unleashed – within his family and from the forces that have gathered to destroy it.

His only defense is three women, on a farm at the end of the lane. The youngest of them claims that her duckpond is ocean. The oldest can remember the Big Bang.

I’m a fan.  More than that I don’t need to say.  This sounds magical and strange and odd and vintage Gaiman.  I must have it!

There we have it – only a tiny few of the books on my massive wishlist.  Putting them on the wishlist is almost as good as adding them to my basket, but not quite.

We now have a new and reinstated rule in the house: one book in, one book out.  It makes sense.   As it stands we have around a hundred books that need to go out to charity shops this weekend, along with a handful of dvds that we now no longer want.   It’s all about trimming the madness in the house to make it a more cohesive and creative living space for both Mark and myself.

Here’s hoping we can pull that off.