I realise it’s all about money for the big Hollywood film makers. What do you call them? At least you can call publishers “houses” but what do you call the film producing companies? Ah, studios! Anyway. My bug-bear is that Hollywood is playing loose and fast with mythology and making a complete hash of it. Who in their right mind, after seeing the utter crap being produced, will find their interest piqued enough to go and read the myths in their original format? The reason for my ranting is:

Last night I watched the travesty called Immortals. Apart from a few good action sequences and fight scenes, the movie was awful. Don’t get me wrong – I’m all for retellings and reworkings and changing things around but come-on, turning TITANS into things that look like they are 3 month old zombies showcased in The Walking Dead and the film-makers expect us to BELIEVE that an entire war was fought to release them because they are so very fearsome, when all they can do is run fast…yeah, that leaves me cold. The Titans, these inglorious creatures from mythology who put the fear into the hearts of man…are reduced to wan imitations? And as for Zeus and his family of super warriors to be eviscerated as easily as all that? Come on. Get a grip. Pull the other leg.

Moving on from the closing scenes with the awful Titans running around like eejits, before that we get something that’s supposed to be Theseus’s story. Gone is all the truly interesting bits and we’re left with a rather pretty but very dull Henry Cavill flexing his muscles by leading us around a sound-stage that is so dark you need the green lantern to see where you’re going. His speech to the army who initially rejected him is so bad, did a three year old write it? It stirred my ire, not my lust to fight some Bad People!

Surprisingly, the only person who seemed to be having fun was Mickey Rourke as the Bad Guy. His character Hyperion was said to have been one of the Titans and Mr. Rourke has great amounts of fun milking it. And he is fearsome. And frightening and single-minded. The pale imitation Titans we see at the end of the movie, after their release from Mount Tarsus, who go toe to toe with Zeus and his golden clad family…not so much. 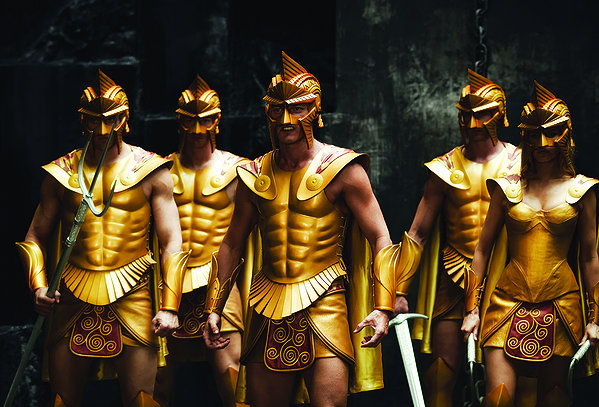 What is wrong with telling a decent mythology story? Surely, they would not have survived for all these thousands of years, if they did not speak to us on a very base level? I genuinely think, after the trash that was Troy, Clash of the Titans, Wrath of the Titans and Immortals, the world is probably ready for a decent version of any gorram mythology.

Well, I must apologise for being a bit of a ranty-Liz. It just really bugs me that with all that money at their disposal, not a single decent movie can be made. These stories are important and because more people in parts of the world tend to go to movies, rather than read books, it’s sort of duty of care. Also, pride: how can you make drivel like that and still hold your head high? Surely it must wither your soul a bit? Because there is no way that you don’t know, whilst in the process, that you’re going the wrong way and producing something sub-par.

Film audiences are intelligent enough to follow decent story lines, complex and layered things that make you sit up and take notice. I’m tired of getting movies from Hollywood – sorry that I’m picking youse lot in Hollywood – that make me feel dumb. Admittedly, it is my choice to go and watch them, but if it’s the only thing that’s being made, where does the fault lie? And as I’m not a fan of rom-coms, where does that leave me?

But really, mythology is important.  This quote by one of my favourite writers, Karen Armstrong, manages to say it far more eloquently than I can:

It is, therefore, a mistake to regard myth as an inferior mode of thought, which can be cast aside when human beings have attained the age of reason. Mythology is not an early attempt at history, and does not claim that its tales are objective fact. Like a novel, an opera or a ballet, myth is make-believe; it is a game that transfigures our fragmented, tragic world, and helps us to glimpse new possibilities by asking ‘what if?’ — a question which has also provoked some of our most important discoveries in philosophy, science and technology.

And another quote by Jack Zipes:

Over the centuries we have transformed the ancient myths and folk tales and made them into the fabric of our lives. Consciously and unconsciously we weave the narratives of myth and folk tale into our daily existence.

Another thing:  I thoroughly enjoyed 300.  I loved the graphic novel but I do think far more could have been done with the movie.  Although, the imagery is very strong, brutal and to the point.  Troy…the only thing they did right in Troy is cast Sean Bean as Odysseus.  And Eric Bana as Hector.

With each new movie that comes out, my heart hopes beyond hope that his time around they’ll get it right, and yet they don’t.  I can’t wait to proven wrong in the near future.

2 thoughts on “Mythology and how Hollywood screws it up.”