It’s been a little while since I blogged.  Mostly because I’ve been a lazy cow.

The problem at the moment is New! Shiny! Ideas! that keep distracting me.  Also, bizarrely, I’m not sleeping well.  Also, I’ve not sat down with my moleskine notebook to make notes on any of the New Shiny Ideas and that’s unlike me.  And I think I’m reading far too many beautifully written books at the moment so I keep judging my writing against what I’m reading and feeling a bit dejected.  But I’ll get over it, right? Right!

There are a lot of simmering things happening all around me with various friends and close acquaintances.  It’s exciting and thrilling and I think I’m also keyed up about them waiting to hear about things from them.  There’s only so much strain my tiny heart can take, dammit!

We’ve been to see John Carter (of Mars) which I genuinely enjoyed.  It’s a great pulpy matinee movie and I dearly hope Disney sucks up the bad press they’ve given it to realise that people actually liked it. 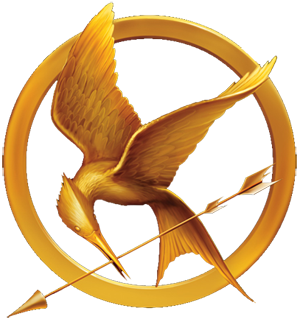 I’ve also been to see The Hunger Games (twice) – what a show.  I wore my pin and everything.  I sobbed, I grinned, I saluted.  I wasn’t convinced about Peeta at the casting, but now I think they’ve been wise.  So far, Gale has to prove his acting chops and not just look emo.

Mark and I are really enjoying Grimm the TV Show – we like the sub-culture of all these creatures existing in Real Life and Our Times.  I also like that they have these incredible German names.  If only they would get rid of the utterly pointless girlfriend – I suspect she’s going to become fodder for a creature.

And miraculously, we managed to miss the first episode of ONCE this Sunday past.  I know – get us.  However, it will be on catch-up so we’ll get round to watching it sooner, rather than later. We were delighted to see the trailer for Mirror Mirror at both the movies we’ve been to see.  Now that looks like a mad romp.  I cannot wait to see it.

There are so many great movies coming up, including Cabin In The Woods, helmed by Joss “God” Whedon and by all counts, it’s going to be all out fun.  I’m all for subverting genres and I’m very interested to see what’s been made of this “college kids go to a cabin in the woods” horror.  If it’s as good as Tucker and Dale VS Evil, I’ll be happy.  (see what I did there?)

I’ve joined up over at Kaz Mahoney’s mad writing for April so I can kick Grimm 4.0 in the butt.  I’ve been coming in to work early every morning for a past few days now, getting words down.  It’s not as much as I’d like, but it’s still far more than I would have if I weren’t doing them.  But I’m worried about the pacing and worried I’m having people sit around talking too much.  But it will get fixed.  I hope.

This Easter weekend is going to be such fun – lots of reading and writing time, I think.  Also going to gym! I even bought some exercise clothes – mostly because my boardshorts I used to wear to gym are a bit too big now so they make my legs look spindly.  And we get to visit our friends for Easter Lunch on Sunday, which will be fun.  I think this is the first Easter in about…seven years that I’m not cooking up a storm for hordes of peole.

It will make a nice change! Hopefully I will be able to climb stairs and use cuterly as, as I’m sitting here writing, I can feel my muscles aching from gym abuse.  And all I want to eat is toast and scrambled eggs.  Mad, right?

2 thoughts on “April has sprung!”