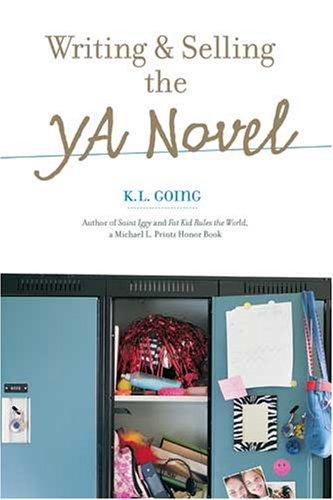 A bit of a promo for one of my fave “how to” titles:

From Amazon’s description it says: Learn what a young adult novel is, how to write young adult fiction, how to get it published, and how to promote it. This title covers writing for young adults from start to finish: offering instruction on writing for this special audience including discussions of plot, setting, characters and revision. It gives tips on getting your novel published and promoting it once you have a book contract; and offers insight from teenage readers.

So far, so the same, you may think. But no, I wish I could take Ms. Going’s chapter on the History of YA and copy it and post it on the internet so that those who don’t understand what YA is and where it comes from could read it and understand where this dynamic section of fiction originates, who the leaders were and the struggles it’s had coming of age.

I’ve had, according to Amazon, this book since 17th Feb 2009.  I’ve read it a few times now.  I remember reading it the first time and getting annoyed with the way it was subdivided into things like “Homeroom” “History” “Social Studies” “Lunch”.  Bah – why would you do that to a book? I am not in school, I have not been for a long while.  I don’t want to read a book broken down into fictitious school periods and sit through dull lessons.

And then I’ve come to realise why the author did it – she linked each “period” to a valuable lesson – both in writing instructions, but also how genuine teens surveyed for the book feel about what’s being written for them.

It’s taken me a while to fall in love with Writing & Selling the Young Adult Novel but now I really do think that it is one of the better “how to” books out there.  The author uses great examples, both modern and old, and it makes a lovely change to have contemporary writers books mentioned, rather than harkening to the first tranche of YA novels that now falls under the “golden age of YA” section.  Admittedly, it’s now dated slightly, but the advice remains sound and it’s written in a friendly, informal and yet very informative way.  You really just have to pay attention.  <- this is me alluding to the fact that I did not pay proper attention the first few times I read it.

Onto other things: 3 people whom I trust implicity has read the new bits of Grimm and the verdict seems unanymous: I’ve found my book’s real voice.  Bloody hell, it’s only taken (counts in head) four drafts, one recent false start, a meltdown of apocalyptic proportions, tears and me dumping EVERYTHING I’ve ever written on Grimm and starting from scratch.  And you know what? I feel pretty pure about it.  I don’t know how else to put it.  It feels like I’ve worn an ugly tattered dress for the longest time, wading through various incarnations of Grimm and the dress was just getting heavier with muck as I could no longer see what made me love it in the first place, but now, after going through what amounts to a carwash, my dress is new and clean and tidy and look, not a splatter of blood or gore on it.  Well, not yet anyway.  The relief is immense.  As is personal pride.  It turns out the whole thing about “read read read” and “write write write” seems to be true! Who would have thunk it?

Yesterday the hot chicks over at Novelicious announced a brand new competition on their website and I had to blog about it because it is such a grand competition for aspiring writers.  Go check it out.

GRIMM the TV show has finally aired here in the UK.  Again, utterly full of me-me-me here but I can’t tell you how relieved I am that I followed my gut-instinct and changed major things in my Grimm.  The first episode of the TV show came so ridiculously close to parts of my original storyline, I might have been part of the original crew sitting down to script the story.  However, the show looks promising and I’m looking forward to watching more of it!

We are almost done with Season 2 of Fringe.  The show just keeps getting better and my love for the Kurtzman and Orci bruvs just keeps growing.  I’ve succumbed and  bought Friday Night Lights and we sat down and watched the first episode over the weekend.  Wow.  Just wow.  Yes, it’s about American football but it’s also about so much more.  The opening episode really struck me as the framing episode, the one setting up a lot of the forthcoming storyline and you know, I really don’t mind.

And it looks like Hansel and Gretel: Witchhunters (starring Jeremy Renner and Gemma Arterton) have been moved to January 2013 release – it makes me wonder why.  Too many fairy tale movies and shows out this year? Are they worried about oversaturation? Who knows!

Speaking of the delicious Jeremy Renner, I watched the new Bourne Legacy trailer and can’t wait to watch it.  It looks really good – Bourne Legacy.

2 thoughts on “A favourite “how to” title & other stuff”