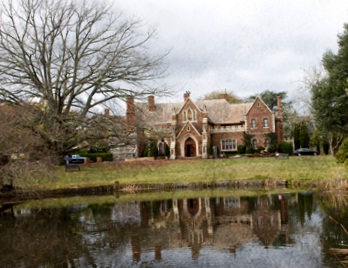 Mark and I watched DBAOTD yesterday.  And I thoroughly enjoyed it.  Probably more than I should have, as really it was a pretty standard script:

1. young girl travels to live her dad in a new home

3. the love interest has doubts about her abilities as a “step-mum”

4. the young girl is melancholy most of the time anyway, but the move has made her more so.

5.  the house is odd and spooky and peculiar

6.  she hears voices, tries to tell the adults about it, but no one listens

But, what I loved about the movie is how we aren’t entirely sure if the creatures we are seeing and hearing are real.  There is doubt, because the writers have already created doubt in our minds, by showing that the young girl isn’t too stable.  Also, the young girl who took the role of Sally – actress Baillee Madison – utterly convinced as this shy, arty, sensitive child who already has so many issues to deal with. Guy Pearce was good as the distracted dad, who is so busy renovating the house, he doesn’t have much time for young Sally.  Katie Holmes did really well as Kim, the “wicked” step-mum-to-be and I liked that in the end she was the one who took Sally’s side, when she realised that what Sally is going through is more than just childish tantrums.

Another thing I liked: Nixey’s eye for colour and composition.  Strongly influenced be Del  Toro, the locale of the house and the house itself was just superbly created.  Both elegant and rambling the house exudes enough menace yet enough old world charm to make you shrug off feelings of concern.  You will want to live in a beautiful pile like this if you are an adult, but for an uncertain child, not so much.

The fact that it is shot during autumn, into winter, also gives a great appeal.  Thunderstorms and glowering skies abound through the movie and it all just continues to enhance the look and feel of the movie.

I loved it because I am a GDT fan and I think he is genuinely a very talented writer and producer.  I know Mark enjoyed it too as he likes darker stuff but somehow I wanted more but am not sure what that more would be, you now?

It was a satisfying, yet unsatisfying movie.  It’s not at a high enough level to be compared to either The Orphanage or Pan’s Labyrinth but probably on par with Hellboy. If that makes sense?