I saw this being done by various graphic novel illustrators and artists.  I think the origin of this meme is on the DeviantArt website but I thought that it looked like too much fun to pass up, so I’ve done my own little “things that influenced me”.  I’ve not looked at books and movies later than 1991 – which is roundabout then that I decided, at the ripe old age of 18, that I do in fact want to be a storyteller one day. 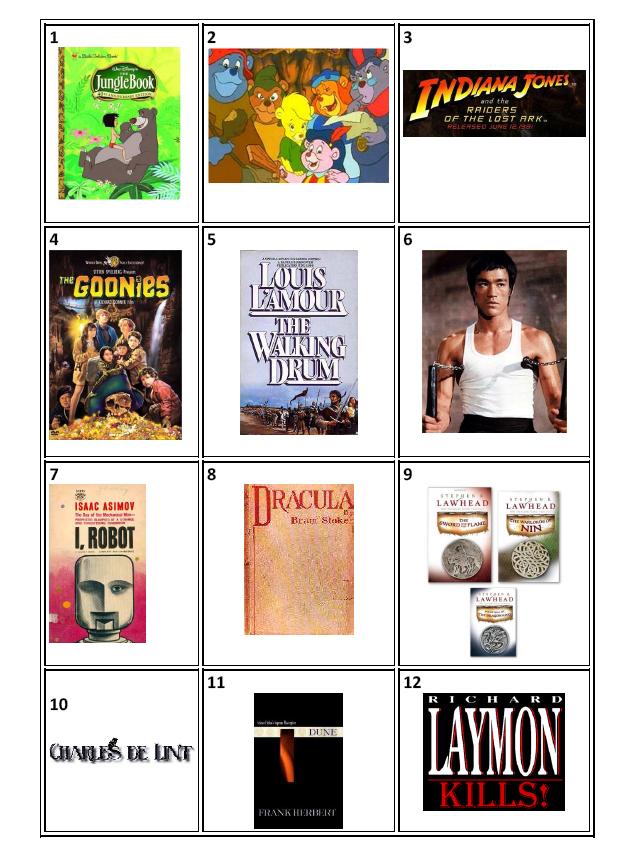 1.  Like most kids I was brought up on Disney.  Sundays were Disney days and cartoons ran on tv for most of the day, on some channels.  I remember going to go and see The Jungle Book in the cinemas with with my sister and niece and I loved it.  My niece – much younger than me – thought it was pants.  What did she know, right?  I have subsequently read The Jungle Book and recently bought a very battered copy of it to re-read.

2.  The Gummy Bears – oh my crumb!  How everyone I knew loved this show.  I loved the characters, the trouble they got into, his evil Dukiness.  It was just ace.  In fact, it was so ace, we had to tape the Gummy Bears and send it along to my brother and his friends whilst they were doing their national service in South Africa, at the time.

3.  Indiana Jones and the Raiders of the Lost Ark.  Now that is storytelling.  And the start of a complete obsession.  Not just with Indy but with Egypt, lost treasure, action adventure movies and books but with wanting to travel, to have adventures or if I couldn’t do that, write about people who go and have these amazing adventures.  I could not get enough of this movie.  I know it so well, I can do the lines.

4.  The Goonies – bunch of kids going on an awesome adventure, complete with Pirate Treasure and bad guys.  What is not to love?  I recently watched it again and well, HEY YOU GUYSSSS! gets said maybe 500 times in this flick.  I love it.

5.  Louis L’Amour – my dad didn’t have many books that he read but he knew his cowboy books and his classics.  He introduced me to Louis L’Amour and my English teachers hated him for it.  Every essay or story I wrote for Creative Writing class was about cowboys and people calling each other “pardner” and range wars and stuff.  I haven’t read a cowboy book in years, but these heroes will always have a place in my heart.  However, this book, The Walking Drum is not a cowboy book.  It follows young Kerbouchard as he travels to Moorish Spain in an effort to track down his dad.  His adventures are utterly epic and amazing.  I love this book for its writing, plotting and adventure.  Also, the fact that it introduced me firstly to another religion that was not Christian.  And that it hugely broadened my knowledge of Europe and history in general.  It woke in me a love for travelling and for experiencing new cultures.  This is the book is amazing and I cannot recommend it enough.  In fact, I still have my original copy my dad bought me after I read his copy to bits.

6. Bruce Lee – the martial artist, the man, the actor.  I loved this guy so much.  I remember going to the movies in our neighbour’s back yard.  They set up the projector at the back of their house and played the movie against the garage wall.  I remember watching Enter the Dragon and irrevocably falling for Mr. Lee. I may have strayed to Jet Li on occasion but no one has ever been able to mesmerise me cinematically as much as Mr. Bruce Lee.  A true legend.   Also, the cause of my brother breaking his best friend’s nose trying to get to grips with nunchucks.

7.  Isaac Asimov – I inherited a box of books from one of my aunts.  She only read science fiction.  It is her fault that I read Asimov and Dune (number 11).  I recall liking I,Robot but obviously not getting all the meta messages.  But, whatevers.  I read these when I was around 13 or so, no wonder my brain is fried and science fiction makes me want to run and hide.

8.  Dracula – how could I not love this epic?  I’ve not been to Whitby yet, but I will.  I’ve not read it in years, but it did influence me heavily in wanting to write deeply dark and gothic things too.  But I grew out of it.

9.  Stephen Lawhead’s Dragon King Trilogy woke me up to the fantasy genre.  I couldn’t stop reading these three books and although I have not re-read them for years, I still love them and may in fact go and buy copies of these, just to have, again.

10.  Charles de Lint – was the guy who introduced me to magical realism / urban fantasy, if you will.  With his tales of Newford a whole new world opened up to me.  I think I own most of his books.  I even have a first edition of Yarrow which I picked up at Eastercon, 2 years ago.  I love this guy.

11.  Dune – my brother made me read this and I’ll never forgive him.  It scared me off science fiction even more than Asimov did.  However, I felt tres intelligent walking around with that volume in my bag.  I remember some names, something about spice, glowing eyes and a messiah.  Oh, and worms.  And sand.  Lots of sand.

12.  Richard Laymon – Thanks to Richard Laymon and Stephen King, I have fears that will never leave me.  Mostly, it’s clowns.  Evil nasty clowns and deserted funfairs.  Richard Laymon rocked my world as a teenager.  His horror novels kept those pages turning and freaked me out no end.  Again, I’ve not read any of his books in recent years but weirdly, his older novels have stayed with me to the extent where I can recall plots and reveals.  That has to mean something, right?

So – these are my twelve books and movies that influenced me as a person up to the age of eighteen.  It’s influenced the way I think and see movies and books and characters and writing.  It’s also formed a basis for things I love to this day and some things I struggle with.

Doing this meme was a great exercise.  It really got me thinking about the books I loved growing up and the movies I liked.  If it strikes your fancy, why not do your own “12 things that influenced me”.  I’m likely to do another one in a few months time, but for the older Liz.  Maybe I should title this as the “things that influenced the 18 year old me meme”?