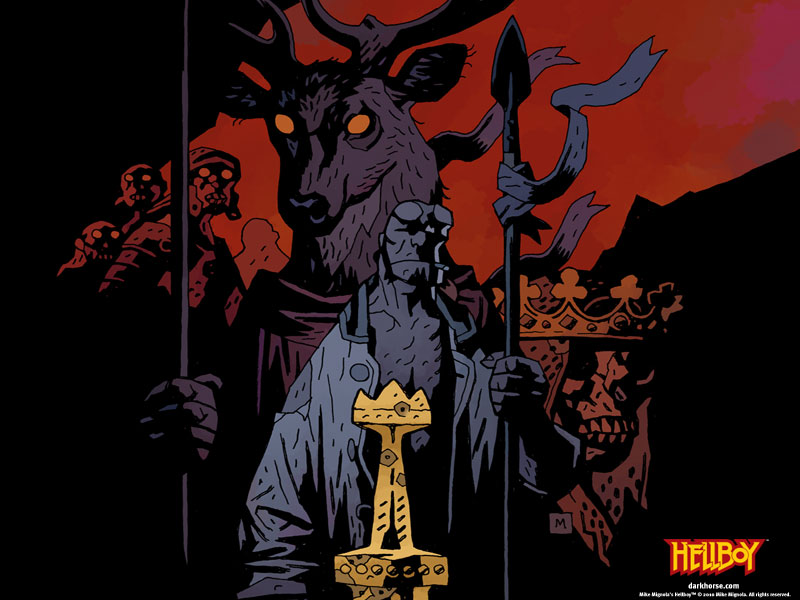 I’m a sensible (on occasion) adult woman in her 30’s yet I have this burning desire to succumb to the fangirliest thing of all time.  To write fan fiction – not even online, but for myself.  Of Hellboy and the BPRD in particular.

I can see the raised eyebrows and the shocked expressions.

There is something about this character that Mike Mignola created that really appeals to me.  Maybe it’s Hellboy’s struggle to be seen as the good guy by the rest of the world?  Obviously the first thing everyone sees is this big red brute, with a big-ass gun and sawn off horns.  He looks like the bad guy, but he isn’t.  He’s on our side and he’s good at beating up baddies.  But does our perception of him colour his actions and his desire to be seen as the good guy in the end?  Deeply interesting questions about identity and perceived identity are thrown up here and I love how the stories make that play out, giving a depth of character to something that could easily have become a parody.

Hellboy has “come out” to the mainstream market through the movies by His Royal Highness Guilermo del Toro.  Which I both love and am jealous of as sometimes I like being a secret fan of something that few people know about.  This jealousy usually pertains to new bands / singer-songwriters (see Seth Lakeman and Susy Thomas) and not necessarily writers and movies though.

But I digress.  For me, a dream come true would be able to work on anything remotely to do with Hellboy or the BPRD series.  If it is writing a short story in a anthology like Odd Jobs / Odder Jobs, both edited by the incomparable Christopher Golden or even one day even writing a Hellboy novel like Mr. Chadbourn or  Tim Lebbon did.  Or even, the heaven’s be kissed, being invited by Mike “The Creator” Mignola himself to take Hellboy or any of the characters for a spin in a mini-adventure…well, a girl can dream!

In the meantime, I’ll read the graphic novels, watch the movies and stroke my copies of the various Hellboy novelisations I have oh, and watch the animated films.  What?  What do you mean it’s overkill?  It’s not overkill, baby, it’s true love.  My name is Liz, afterall!

2 thoughts on “Fanning About the Impossible”